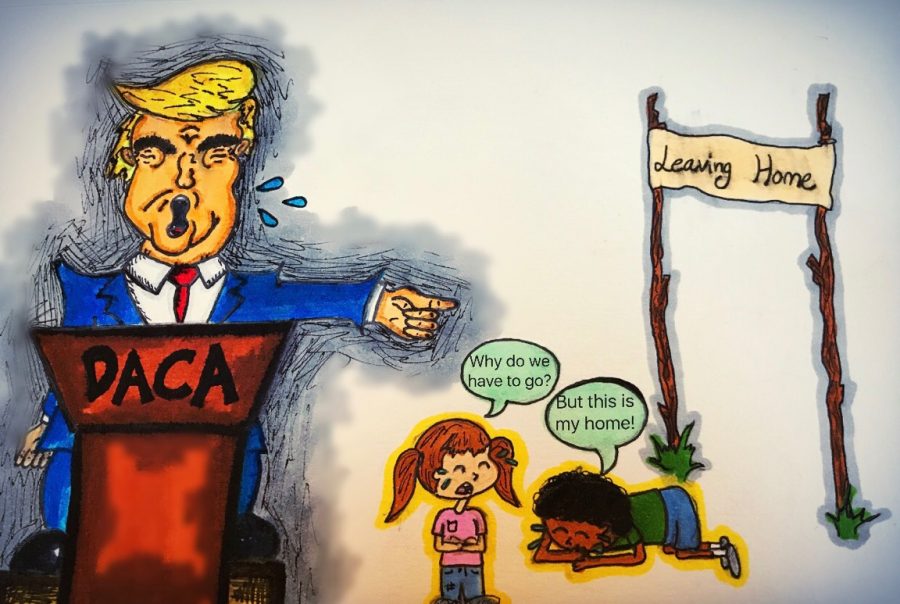 When the Trump administration announced in September the rescission of the Deferred Action for Childhood Arrivals (DACA) program, shockwaves were sent throughout the independent school community—including here on campus.

As of March 5, 2018, “Dreamers,” as DACA recipients are affectionally called, can begin to lose their current protected immigration status. The program, which began in 2012 under former President Barack Obama, protects individuals who may have been brought into the country illegally or overstayed their visas.

The Republican-controlled Congress now has six months to decide whether to save the program.

“Whatever concerns or complaints Americans may have about immigration in general, we shouldn’t threaten the future of this group of young people who are here through no fault of their own, who pose no threat, who are not taking away anything from the rest of us,” Obama recently wrote on Facebook.

Meanwhile, the DACA web site reveals that the organizations is no longer accepting new requests, and that it’s “only adjudicating DACA renewal requests received by Oct. 5, 2017, from current beneficiaries whose benefits will expire between Sept. 5, 2017 and March 5, 2018.”

Since August 2012, nearly 800,000 people have been granted DACA status, allowing them to go to school and work legally in the United States, without fear of deportation.

When Jack Donnelly ’18 first heard about the decision, as an American citizen, he know that he was safe. Still, he couldn’t help but think of how the news would impact others.

“The simple fact is that I likely know people who may no longer be able to live in this country, at least without constant fear of deportation,” says Donnelly. “That’s just devastating, all the more so because these people, while not born in the United States, totally embody what it means to be American.”

In an open letter to member institutions, including Brimmer and May, National Association of Independent Schools President Donna Orem echoed Donnelly’s remarks.

“Dreamers and their families may have intense fears that they will be deported when the program ends or that they will lose the ability to work. For some, the United States is the only country they have ever truly known,” Orem wrote, before adding that schools “have a profound opportunity to help educate today’s students about the great benefits of diversity.

Director of Diversity Jessica Christian says that she was “disheartened” upon hearing of Trump’s decision to target DACA.

“It seemed to me that the administration was, and is, singling out a group of people that have done nothing wrong,” she said.

For his part, Assistant Head of Academic Affairs Joe Iuliano expressed dismay about any move to end the DACA program, which, he said, “protects children who had no choice about entering the country, and who contribute to society in positive ways.”

“It’s an awful shame that our leaders are heading toward kicking out people that have been here their entire lives,” says Michelle Levinger ’19.

Throughout the 2016 presidential campaign, Trump repeatedly said that only he alone could successfully tackle undocumented immigration. In early September, though, he passed the hot button political issue to Congress, urging that body to pass legislation to protect Dreamers, while emphasizing that Obama exceeded his power by enacting the program unilaterally.

Editor’s note: The Gator could not find any community members in favor of ending the DACA program.