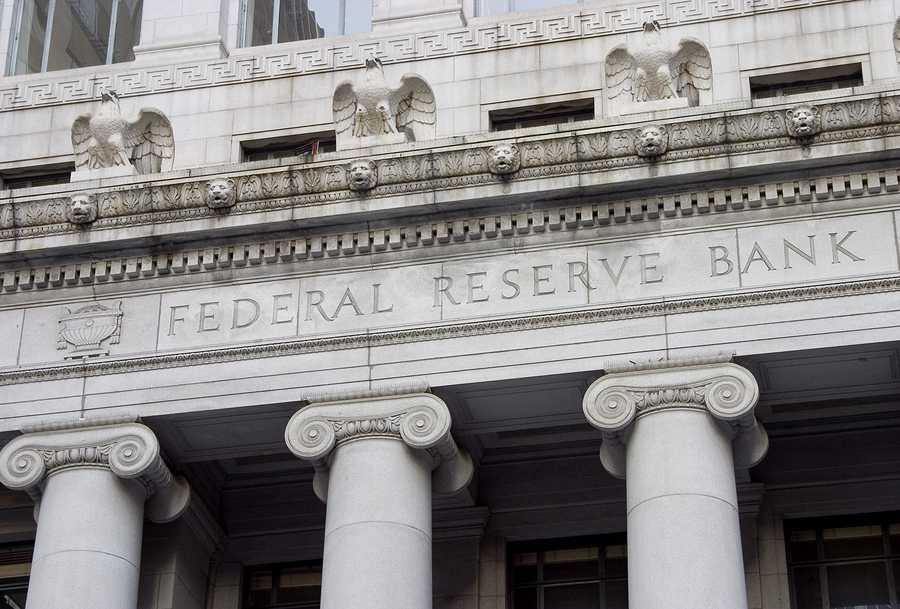 In the second Newsmakers interview, The Gator sat down with Thomas Knox, a leading expert in currency trading, interest rates and credit products. He is currently a portfolio manager in the offices of Convexity Capital Management, and was formerly an Assistant Professor of Finance at University of Chicago Graduate School. Additionally, Knox serves on the Board of Trustees for Brimmer and May School.

In 2009, at the brink of the largest global recession in 70 years, the Federal Reserve made a bold move. To save the economy, the US central bank enacted what some call quantitative easing; essentially, pumping trillions of dollars into the economy.

Critics of the Federal Reserve’s actions predicted that printing more money— literally with a swipe of a keyboard—would lead to soaring inflation. And why wouldn’t it? Money loses value when it’s made out of thin air. But inflation has actually been quite modest. In fact, in the years after quantitative easing inflation has been lower than in some years before it.

“The Federal Reserve’s judgment that we were in the midst of a debt-driven deflation was, in retrospect, an excellent one,” Knox said. “Had they not acted, we likely would have experienced significant deflation, so increasing the money supply only counteracted that—rather than inducing soaring inflation.”

The great recession, the one that prompted quantitative easing, began when large banks stopped making payments to their creditors. Financial chaos ensued as “bad debt” was exposed. Markets collapsed.

Housing prices fell over a third. Homeowners, for example, (and almost everyone else) suffered “debt-driven deflation” as the price of their home declined, but their mortgage payments did not.

And this fueled a vicious cycle, as people cut back spending to pay off debt. As New York Times columnist Paul Krugman likes to say, “my spending is your income, and your spending is my income, so if everyone slashes spending at the same time, incomes go down around the world.” As less spending makes money more valuable, private debt becomes harder to pay off, and the cycle continues.

The Federal Reserve printed more money to devalue the currency. Easier money leads to more spending, which in turn reversed the cycle. Interest rates, which can be thought (too simply) to reflect the supply of loanable funds, were lowered to close to zero. Congress wasn’t far behind, either. They bailed out the banks (Troubled Asset Relief Program), cut taxes, and raised spending.

Europe went a different direction. Like the United States, much of Europe experienced a deep recession, brought about by high levels of debt. The European Central Bank (ECB) attempted only modest quantitative easing, while nations cut fiscal spending abruptly.

“The ECB has been more reluctant to expand its balance sheet, but appears to have arrived at the conclusion that it must do so to dispel the deflation that currently grips the Eurozone,” Knox said. With their economy still hurting, ECB has recently lowered interest rates to near zero and began far larger quantitative easing. The $1.3 trillion stimulus faces numerous practical and political hurdles and will continue to be closely monitored closely by financial markets.

The Federal Reserve’s actions staved off disaster and deflation in the short term, but quite of bit private debt remained. So, in 2011, President Obama and leaders of Congress attempted to reach a grand bargain on debt reduction. It was intended to rein in deficits that are  “fiscally unsustainable” by reducing spending on high-cost programs.

Knox thinks the United States should go the opposite direction, that we should actually continue to spend more money—not less. To make that proposal, though, he explains why debt is not the crash-and-burn scenario some make it out to be. “When a sovereign nation issues debt denominated in its own fiat currency, ability to pay is never in question,” Knox said. “Since the sovereign can create more of its own fiat currency at will, it can, of course, meet any obligation denominated in that currency.”

Just as the Federal Reserve printed money to hold off deflation, they also print money to pay off debt. This ability, combined with the fact that the US is still the safest place for investors to put their money, makes our public debt very “different” from the debt we hear about everyday.

For example, the debt of a family is on a short and limited leash—the bank only has so much faith the borrower will be able to pay them back in the future. But the United States has the privilege of being its own bank. This means that there is no leash (an oversimplification) as long as printing money doesn’t lead to inflation, and rising interest rates.

Nations that do not print their own money and have lower credit ratings are more similar to a family. “Ability to pay may be problematic for nations which issue bonds denominated in the fiat currency of a different nation” Knox said. “For example, Venezuela has substantial debt outstanding denominated in U. S. dollars.”

In short, Knox argues that our debt needn’t be addressed today. So, given that we have more flexibility than it may appear, Knox thinks that we should spend more money to try to boost the economy. Among economists, this is called deficit spending or fiscal stimulus.

“I am very sympathetic to the idea that infrastructure spending is needed,” he said. (Infrastructure spending is the go-to option for fiscal stimulus, due in part, to its widespread impacts on the rest of the economy.) “A thoughtful program of such spending would occur over a long period of time. Its impact would be best measured over decades rather than over months. That said, I would guess it to be very beneficial.”

Fiscal stimulus is not a sure thing, though. When and where to use it has been a hotly debated topic among economists since The Great Depression since the 1920’s.

Knox explains some of the nuance in the debate.“Fiscal stimulus can be damaging when the economy is already producing as much as it possibly can,” he says. “In that event, fiscal stimulus will not (indeed, cannot) increase the production of goods or services, but it may lead to inflation.”

Fiscal stimulus or infrastructure spending, in this case, can be financed two ways. The government can either give itself a loan, or raise taxes. In the event of the former, the government would have the benefit of record low borrowing costs, but would run the risk of damaging inflation and “crowding out” money for private investment down the road. The theory of “crowding out” states that when government asks for bonds- “loans” to help pay off debt money goes the private sector. If it’s paid simply through higher taxes, one could argue, government redirects money that the private sector uses to maximal efficiency.

However, the magnitude of these potential consequences—which ranges from almost nothing to a total collapse—is determined by to what degree “the economy is already producing as much as it possibly can.” And right now, it’s far from it. The Congressional Budget Office estimated the gap between what the economy could produce—potential GDP—and what it has produced, is over a trillion dollars.

There is a strong consensus that President Obama’s $787 billion stimulus, at the start of the Great Recession, worked. The stimulus money filled the spending gap left by “debt-driven” deflation. Considering that our debt needn’t be addressed today, and the fact that demand remains tepid, Knox thinks we ought to give it another go.

When economists talk about “trade,” it generally refers to transactions from one nation’s market to another. The United States and most other developed nations have trade deficits, meaning that these markets buy more goods and services they sell. Developing nations, such as India or China, have surpluses.

As a result, US labor and manufacturing, have taken a hit. Since 2001, over 3.2 million American jobs have moved to China. “The impact of globalization on labor markets is a subject fraught with difficult choices;” Knox says. “what seems reasonable and well-justified policy for some workers may have terrible results for others.”

But before we dive in, I’ll acknowledge that trade policy is complicated topic, encompassing fiscal and monetary policy in seemingly endless swirl of macro-abstractions.

The dollar is and will remain for the foreseeable future, strong. The stability and strength of our economy, as previously noted, makes “stock” in the dollar one of the highest-demand investments in the world. Officially, it is the reserve currency of world— nations finance their debt, hold their savings, protect their currency, and many firms only take payment in the form of dollars. China has invested $1.2 trillion of their cash savings in US bonds.

The high demand for the dollar makes trade deficits a tough nut to crack, especially when the Fed is concerned about inflation. “The Fed is contemplating rate hikes—merely the anticipation of this possibility has actually strengthened the US dollar,” Knox says. “Earlier Fed policy, with its conditional commitment to low rates, did weaken the U. S. dollar, but that appears to be in the past.”

On the other hand, the fiscal side of trade poses different challenges. How do we compete against countries with weaker currencies, less regulation and cheaper labor?

There are two schools of thought on the fiscal aspect of trade policy. One calls for fiscal stimulus, such as infrastructure and human capital investments. Here’s how that’s supposed to work: A smarter workforce makes our exports more competitive, better roads, bridges and transit systems make investment in the US more attractive, and the additional capital in the economy weakens the dollar. In short, by this theory, we would sell more and attract more investment.

The underlying thinking is that government must help solve these fundamental trade imbalances. “U. S. workers’ productivity is crucial,” Knox says. “We have thus far remained at the forefront of productivity-enhancing progress, and we must continue to do so.”

The second school of thought bases their policy off the idea that free markets work well when left alone. They argue that low, consistent inflation is paramount and that government ought to reduce debt, rather than intervene in the markets. Through predictable prices and freer markets, they say, firms will supply consumers with better goods at a lower cost.

This school of thought, unsurprisingly, is strongly opposed to fiscal stimulus. Claiming that the resulting debt will spur inflation, raise interest rates and therefore crowd out money for private investment, these economists argue that government needn’t interfere.

Despite deep-rooted questions in currencies and productivity, Knox thinks the United States shouldn’t isolate itself from a challenge. “I might pose a question in return: as challenging as some of the outcomes of globalization are, do we like the alternative better?  Our revealed preference as a nation is to cope with the issues which arise from globalization because we find its rewards so compelling.”

What do you think? Please provide your thoughts in the comments section below.