Op-Ed: The Path to Curling Success 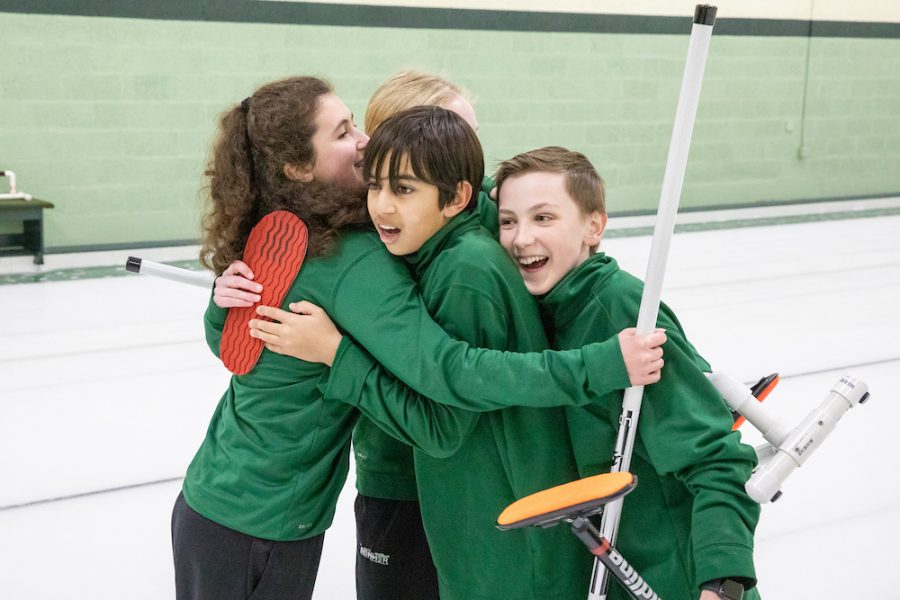 Nico Jaffer '23 (center) hugs his team after winning first place at the championship.

We were down to the last throw of the match. The climactic ending to a crazy and unexpected season that culminated in a seven-and-a-half end final match. There I stood—broom in hand—watching my skip, Karly Hamilton ‘21, prepare to make the final throw of the end—and hopefully the match.

Our team was shocked to have made it this far, as many of our matches were nearly as close as this one was turning out to be. Nobody knew what the final score would be.

When our teams were first assigned, I was matched with Karly and Lily Goodman ‘22. I was nervous because I had no idea how to curl, and my knowledge of the sport was lacking.

However, being the great skip she was, Karly helped me hone my skills and learn the rules of the game. As a result, our team progressed greatly as the season progressed.

Curling teams usually have four players, but not us. Due to unforeseen circumstances, we ended up with a team of three. When substitute players were available, we were able to play with a full team, but this was not always the case.

After winning our first two matches of the season, we lost a difficult third match before bouncing back in our fourth game with a victory, making our record 3-1. After beating our fifth opponent, 11-0 in our highest-scoring match of the season, we faced a top team in the league, and came up short, falling to AMSA 1, 7-3.
Daniel and I swept harder than we had ever swept before. The stone flew directly at its target and hit Winsor’s stone, forcing it out of scoring position and securing our victory.
However, this loss helped us realize that we needed to stay relaxed during matches and make sure to have fun. This was something that would prove to be very important in the upcoming matches.

After we won our final match of the regular season—yet another close game that took us down to the final shot—we were slotted in for a semi-final match in the B bracket against another Brimmer team led by skip Isaiah Claiborne ‘21.

Our semi-final match was a controversial one and it came down to the wire. By the time 3 ends had been completed, we were locked in a tie, 2-2.

Normally, in the event of a tie, the game ends in a draw. However, in a playoff game, a winner must be determined. This meant that the match would have to be decided by a very intense shootout—skip stones.

Skip stones are a shootout where the skip from each team throws a stone, trying to get it as close to the center as possible. If both of the skips miss their shots, the shootout proceeds to the vices.

Thankfully, our match did not require vice stones, because after Isaiah missed a close shot, Karly landed her throw in the back of the house, securing our victory.

That meant we were on to the B finals. One game to go until we were champions. In the final match, we were fortunate to have Daniel Murray ‘23 play as our lead, rounding our team out to four players.

Our final match lasted twice as long as a normal game. While a normal match for us consisted of a maximum of four ends, our final match was seven-and-a-half ends.

Playing against a tough Winsor team, the match was tightly contested. After they took a 1-0 lead in the first end, we struck back and scored two in the second end. Then, while Winsor scored two in the third end, we took the lead right back in the fourth end. After they scored in the fifth end to tie the match, we secured a two-point lead in the sixth end, giving us a 6-4 advantage heading into what we believed was the final end.

At the end of the seventh end, we realized we only had ten minutes remaining. We knew we didn’t want to play another end and jeopardize our lead, so we took our time calling and setting up our shots. As I watched the Winsor skip throw her final stone of the end, I hoped that it would be the last throw of the match.

As we cleared the ice and added a point to Winsor’s score, I checked Daniel’s watch and saw that it was 4:54 p.m. I looked over at TCC Junior Program Coordinator Scott Price as he walked onto the ice. He yelled the words that I was dreading: “Half end!”

I was nervous for the half end. Despite having played in almost ten matches throughout the season, I wasn’t prepared for the pressure this match had created. As I watched the first six throws glide down the ice, my stress level continued to rise.

This did not make a lot of sense because we were in a good position to take home the trophy. As we were holding on to our one-point lead, we just needed to prevent Winsor from scoring.
I couldn’t believe that as a first-year curler, I had been given a chance to be on such an amazing team and win the B final. Out of our nine matches, Karly made a total of six game-winning shots.
Unfortunately, the Winsor skip made a near-perfect takeout shot that put her stone in a scoring position. That meant that it was up to Karly to make her final shot—and hopefully win the game.

As I watched my teammates discuss the final call, I walked back with Karly as she prepared to make her final throw. I could tell that she was nervous, but I didn’t really understand why. She had been coming up clutch all season. Was the pressure finally getting to her, or would she come through for us in the most important match of our season?

Karly came out of the hack in great form and released the stone, which headed straight toward the stone she was planning to take out.

Daniel and I swept harder than we had ever swept before. The stone flew directly at its target and hit Winsor’s stone, forcing it out of scoring position and securing our victory.

After our stone made contact with Winsor’s, I felt so many emotions that I didn’t know what to think. Excitement, confusion, and fear were coursing through my veins.

However, the emotion that I felt most was joy. Pure joy. I remember running over to give the biggest bear hug to Karly and celebrating our success with a team hug.

I couldn’t believe that as a first-year curler, I had been given a chance to be on such an amazing team and win the B final. Out of our nine matches, Karly made a total of six game-winning shots.

It was a fitting conclusion to our rollercoaster of a season and a memory I will never forget.

Special thanks to Karly, Lily, and Daniel for being awesome teammates and teaching me so much about the game of curling.