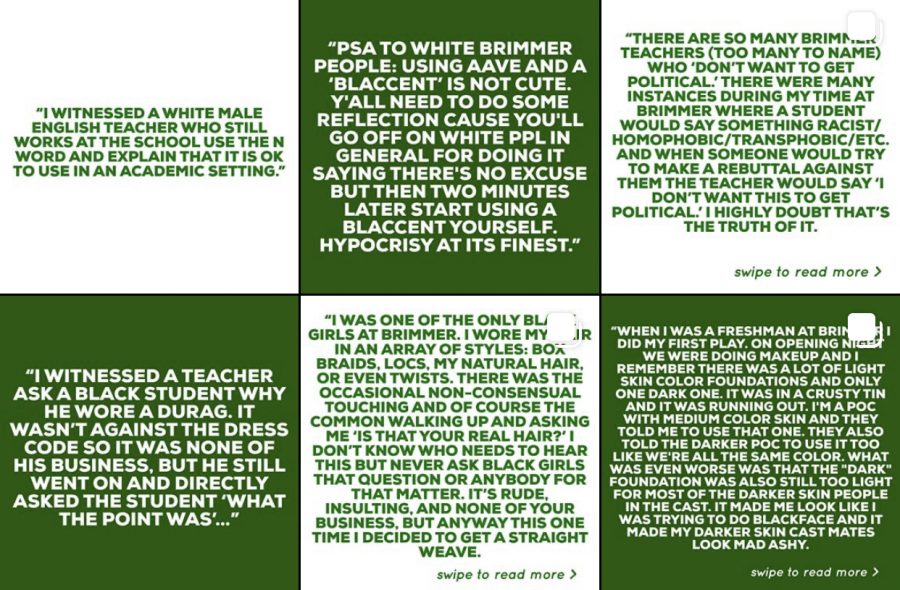 In the midst of a surging pandemic, recent high-profile fatal encounters between Black people and police have renewed efforts from students of color, especially at historically white private schools, to call out fettering racism and bias.

Leveraging momentum of using social media to speak out against the tragic deaths of George Floyd and Breonna Taylor, among other Black people, students are now demanding change in the classroom and in their private institutions overall.

A @blackatbrimmer Instagram account—which as of this story’s posting has 26 posts and 418 followers—invites past and present community members to share experiences with racism in the community. From questioning the use of the n-word during class discussions to reflecting on discriminatory remarks about one’s appearance, painful experiences are laid bare.

“When we realized that some people had experienced intentional or unintentional bias [and that] it made people not feel part of our community, it really saddened us,” Head of School Judith Guild said. “It made us feel like we can’t have that. If we’re going to be a school that lives by our mission, there’s no room for this.”

Shortly after the account went live approximately two weeks ago, the School published a tweet from Guild and Chair of the Board of Trustees, David Kreisler, which read in part, “We must and will do better as an institution that has, for too long, participated in and perpetuated a long history of institutional bias and anti-black racism.”

Guild, who did not comment on how precisely the School has “participated in and perpetuated a long history of institutional bias and anti-black racism,” said that the community places a special emphasis on student voice, which played a major role in how she responded to the Instagram account.

“We started seeing a lot of schools making statements and we decided to make a really bold statement,” Guild said. “We wanted to make sure that we have a very strong stance, saying if you want to behave like this, then you should not come to Brimmer—and if you behave like this and you make a mistake, you should expect the consequence.”

Director of Equity and Inclusion Jessica Christian explained the meaning of the School’s statement.

“It is important to understand that when we talk about Brimmer having ‘perpetuated and participated in anti-black racism,’ we are not referring to a community in crisis that is riddled with constant acts of overt racism,” Christian said. “Rather, the standards we hold our students to in terms of things like behavior, norms, personal expression, and learning style, speak to traditional standards set by the original White founders of the majority of independent schools, many of which were created as a way to escape integration in public schools.”

Christian also gave insight into how educational standards can be prejudiced against non-White students.

“That foundation of standards, which are still valued and expected to a certain degree, essentially asks students to assimilate to a culture that was originally established by educated White people,” Christian explained. “When we single out students of color, particularly Black students, for not conforming to these norms or confront them for being somehow ‘different,’ it perpetuates a larger societal problem of seeing these differences as odd and unsophisticated.”

Brimmer is not the only school reflecting on the anonymous posts and taking a closer look at how to ensure its community is one where everyone is embraced and treated equally.

According to a July 1 Washington Post article, the Instagram accounts “show that even at schools with plenty of resources and thoughtful mission statements, educational equity is not yet a reality for many students of color. In their posts, black students describe feeling isolated, stereotyped and diminished in ways that, in some cases, stayed with them long after they graduated.”

Multiple changes will be taking place to “ensure that equity and inclusion work is embedded in each classroom and each part of Brimmer’s programming,” according to a letter from Christian, which is also available on the School’s website.

“As a school, we must work hard to create an equitable environment for all and actively teach and practice anti-bias and anti-racism at every level,” Christian also wrote.

Editors’ note: Given the significance of this story, The Gator felt that waiting until the fall for reporting would be inappropriate. The Gator will remain closed once again until the start of the new academic year.