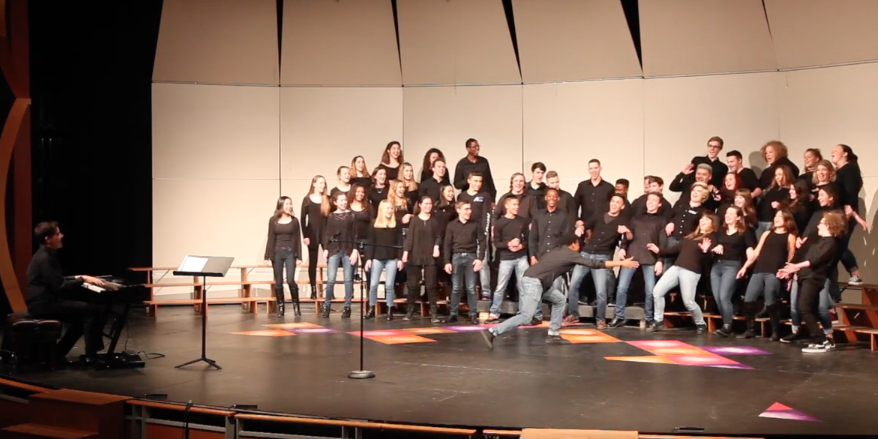 The nine-hour workshop and concert, led by legendary Dana Hall music director David Coleman, brought together schools from all over western Massachusetts. Brimmer and May joined Belmont Hill, CATS Academy, Dana Hall and, of course, Groton School. Gospelfest, though usually dominated by independent schools, was also attended for the first time by Newton North High School.

The six schools gathered to share songs each chorus had prepared, and to learn new numbers as a group.

“Gospel comes from protest songs,” said Shaunielle McDonald, Director of Diversity at Brooks School. “Songs that today protest against racism in America, songs like ‘Blacker the Berry’ by Kendrick Lamar, fall in the same vein as ‘We Shall Overcome’ did during the Civil Rights Movement of the 60s and ‘Wade in the Water’ in the days of American slavery.”

McDonald spoke about the significance of Gospel music while teaching the group “I Feel Like Going On,” a spiritual about the importance of perseverance (lyrics below). Specifically, McDonald connected the song to the Black Lives Matter Movement—an example of the continued relevance of music in protest.

Greenline performed two songs in the evening concert, “Take Me to the Water,” and“Ride On, King Jesus,” the latter of which was workshopped and led by Brimmer’s first student conductor, Tyler Best ’18.

“Gospelfest was lit, first of all,” says Best. “Conducting was one of the scariest things ever because really everything depends on you. I was very nervous at first, but once I got more comfortable it got more fun. It was one of the best experiences of my life.”

“If it were not for polished choral renditions of slave songs, we wouldn’t even have gospel music,” said Coleman. “That choral, stylized music? That is gospel music. And you guys did a really good job of it.”

Though trials come, on every hand