Apart from their flamboyant hairstyles, Donald Trump and Andrew Jackson share a variety of frightening similarities — and this could spell more than just a fashion disaster for America’s future.

Upon assuming office in 1828, Jackson worked to expand suffrage for white males — not just property owners. But in appealing to the masses, this populist implemented policies that not only destroyed America’s financial system, but also lead to the violent and forced removal of Indian tribes. That the president-elect shares so many unfortunate qualities with “Old Hickory” may shed some light on how the billionaire businessman plans to lead.

Take Trump’s immigration stance, for instance. He paved his way to the White House through offensive, anti-immigration rhetoric. As Trump said, “I do business with the Mexican people… And they’re bad, They’re really bad… I’m talking about people that are from all over that are killers and rapists and they’re coming into this country.” This wasn’t some slip of the tongue. Trump believes what he says, and Americans should take his words seriously.

Trump’s proposed Muslim ban and anti-refugee stance also speaks to his distorted plan to “Make America Great Again.” What makes America already great is that it is a melting pot, and we should do all that we can to keep it that way

The parallels don’t end there. Both Trump and Jackson despise anything that they perceive as un-American. In 1830, Jackson passed the Indian Removal Act which lead to the “Trail of Tears,” in which members of the so-called “Five Civilized Tribes” were relocated westward by armed forces. The Cherokee, in particular, suffered from disease, the elements, and starvation as they trekked 1,000 miles to Oklahoma. Historians estimate that around 4,000 perished, though no official records exist.

Private John G. nnett, who traveled with the Cherokee, detailed his anguish in his diary. “The trail of the exiles was a trail of death,” Burnett said. “I have known as many as twenty-two of them to die in one night of pneumonia due to ill treatment, cold, and exposure.”

Additional similarities between Trump and Jackson cause concern about what a Trump presidency might look like. Will Trump really build a wall and force Mexico to pay for it? Will he really deport undocumented immigrants in massive waves? Trump’s people-pleasing-aesthetic — telling the masses what they want to hear—may cause some serious damage, especially if he acts on his words.

Trump and Jackson also share a personality that is prone to aggression—although the two differ on forms of expression. For those whom Jackson felt had defamed or dishonored him, he demanded either an apology or a time to duel.

During a duel on May 30, 1806, Jackson mortally wounded Charles Dickinson — making him the only president in history to have committed murder. The two men, both horse breeders, engaged in a heated rivalry. Dickinson accused Jackson of cheating in a bet and referred to him as a “coward and an equivocator.” Not only did Dickinson attack Jackson character, but he also insulted his wife, Rachel. Still, rather than search for a solution befitting of a politician and future president, Jackson embraced violence.

For his part, Trump has responded to those who disagree with him with verbal harassment on social media. He has posted demeaning tweets to his 16.5 million followers, replying to people’s public criticism of him with hateful, childish language. 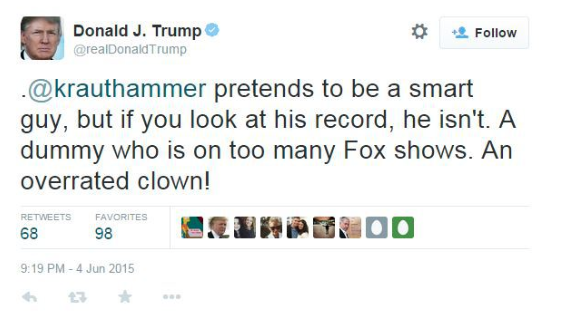 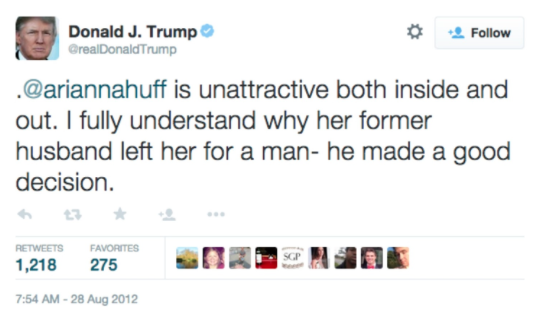 In addition to threatening to jail Hillary Clinton, Trump also threatened her life. “Hillary wants to abolish — essentially abolish the Second Amendment,” he told his supporters during a North Carolina rally in September. “By the way, if she gets to pick, if she gets to pick her judges, nothing you can do, folks. Although the Second Amendment people, maybe there is, I don’t know.” It’s naive to believe any spin about what Trump really meant here. Trump’s threats smack of despotism, no matter what his backers claim.

Unfortunately, the similarities between Trump and Jackson are far too many. Their propensity to incite violence, perpetrate racist acts, and inspire insular thinking  are just a few of these shared attributes. The future of America depends on people standing up to Trump’s rhetoric.

We need to seek inspiration from what makes us as Americans truly special. We live in a large and highly diverse country, where we benefit from differences and learn from differing points of view. We find ways to empower America’s immigrants to become productive participants in our society.

Editors’ Note: Sophie Lapat ’18 wrote this article for an assignment in United States History, which is also taught by Gator advisor David Cutler ’02.